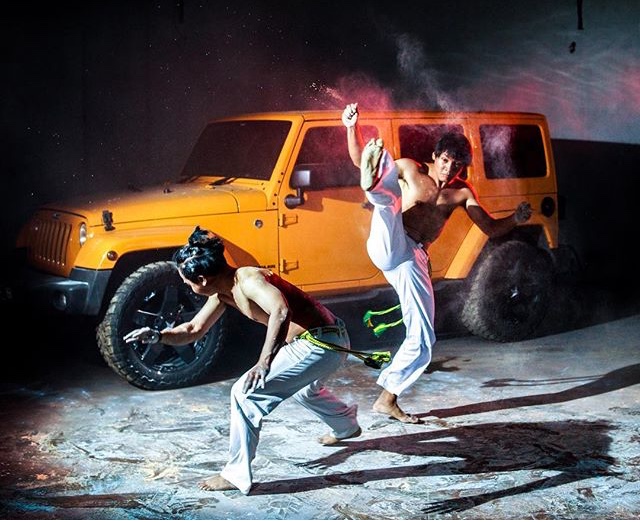 Capoeira (Portuguese pronunciation: [kapuˈejɾɐ] or [kaˈpwɐjɾɐ]) is an Afro-Brazilian martial art that combines elements of dance, acrobatics and music. It was developed by enslaved Africans in Brazil at the beginning of the 16th century. It is known for its acrobatic and complex maneuvers, often involving hands on the ground and inverted kicks. It emphasizes flowing movements rather than fixed stances; the ginga, a rocking step, is usually the focal point of the technique. The most widely accepted origin of the word capoeira comes from the Tupi words ka’a (“forest”) paũ (“round”), referring to the areas of low vegetation in the Brazilian interior where fugitive slaves would hide. A practitioner of the art is called a capoeirista (Portuguese pronunciation: [kapuejˈɾistɐ]).[11][12]

The dance and music was incorporated in the system to disguise the fact that they were practicing fighting techniques. After the abolition of slavery in Brazil, capoeira was declared illegal at the end of the 19th century. However, by the 1920s, authorities began to relax enforcement on its prohibition, and martial artists began to incorporate capoeira technique into their practices. By the 1970s, capoeira masters started traveling around the world, helping the art become internationally recognized and practiced.